Our focus is storytelling, with multidisciplinary performing arts, plastic and visual arts, games, and learning experiences.

We do practice arts as a form of self-expression, and self-exploration (self-knowledge)

We communicate and educate with multidisciplinary performing arts.

We invite people to reflect on topics that are actually in our society, addressing global, local, and social pressing issues

We perform on stage, also online (media), publish e-learning, and e-books, and do create smart apps.

Watch the video presentation (e-learning) about our methodology 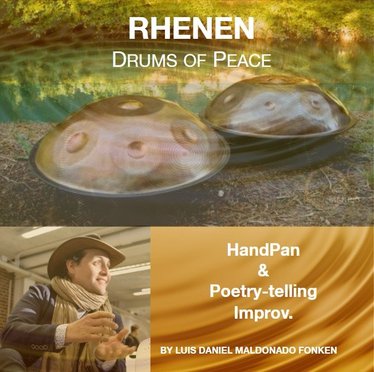 Luis has been researching on nature-inspired mathematics of ancient cultures and civilizations, for more than 27 years. Fascinated by music, dance, and geometry, he discovered a system of generation of tones and geometric positions of the body, that produces a therapeutical effect, brain stimulation, and emotional self-awareness.

The HandPan that Luis uses has 9 Tones and 1 Bas Tone, and 6 of these special frequencies were used in antiquity. He use the HandPan in his workshops to explore improvisation in dances, sound, human voice, poetry, and storytelling. Luis also offers Sound-Bathing experiences combined with deep relaxation and conscious breathing. Like a sound massage.

Today his workshops are offered to youth and entrepreneurs that like to develop skills like adaptation, accelerated learning, creativity, emotional intelligence, self-awareness, and empathy, indirectly through the practice of performing arts. For which the use of the HandPan offers a great advantage.

" The HandPan is a valuable tool to enable work-life balance, mental health, and creativity. If used at home, business office, and at schools." ~ LDMF

The first HandPan was created in Switzerland in 2000. Inspired by traditional percussion instruments of the east, and west. Making the instrument is a handicraft, it is difficult and it takes a lot of time. Each instrument is unique. Different materials and techniques are used, each with its own effect on sound and quality.

The basic form of a handpan consists of two metal half-shells glued together, a center tone field surrounded by a circle of at least seven to 9 tone fields on the upper side, and an opening in the bottom side center, which allows the generation of the bass note through Helmholtz resonance. It is an idiophone type of musical instrument. As it creates sound primarily by the vibration of the instrument itself, without the use of airflow (as with aerophones), strings (chordophones), membranes (membranophones) or electricity (electrophones).

The HandPan due to its resonance waves can be used for different purposes: leisure and intuitive playing, concerts, improvisation with dance, storytelling, and poetry, but also for enhancing fine motoric and coordination skills, brain hemispheres synch of children and adults.

It can be used in both schools, companies, and at home, due to its therapeutical, stress release, and brain stimulation effect. For example sound bathing, and body awareness for patients with mental health, mild cognitive impairment, or body awareness issues. It can contribute to good sleep, because the resonance waves of high and low tones combined with overtones, stimulate the brain, produces deep relaxation, and enables self-awareness and contact with human emotions. It is fun to play in groups, creating a collective resonance effect.

© Copyright All Rights Reserved by